What Is A Surveyor? With Graham Cardoe 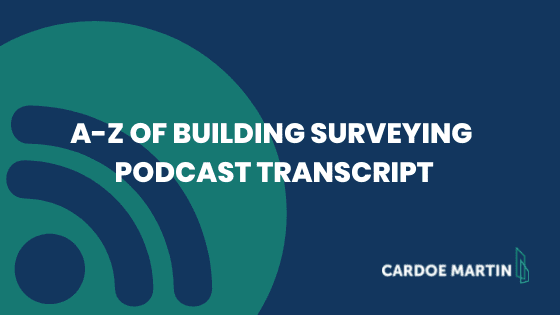 What Is a Surveyor? – with GRAHAM CARDOE

Host:     In this episode joined by Graham Cardoe who is going to chat to us about what exactly is a surveyor and how to tell the difference between all those different types of surveyors and the differences between COAIOB and what RICS Chartered status actually means.  So this is a complex world Graham and why don’t you start off by telling us exactly where you fit into it with your, in versify into some of the different areas.

GC:        Yes absolutely, being a building surveyor requires a professional qualification and practical experience over the period of time they’ve been working and involves acting for clients in most cases who require advice upon buildings both in terms of their condition, repairs required, liability that they may acquire if they take Leases or purchase buildings and we are also involved with property disputes with buildings between buildings and other owners, party wall disputes and we also undertake refurbishment contracts and extensions to properties to improve buildings for clients.

Host:     So those guys we see on Homes under the Hammer as they walk around and then tell the person who’s decided to buy a house without investigation it at auction that they’ve made a dud or something’s wrong that a building surveyor exactly what you do isn’t it?

GC:        A building surveyor would certainly be able to advise a client on the condition of a property prior to auction and personally I’ve had many instructions of that type obviously there is a limit about the amount of detail you can get into because most clients don’t want to expend too much money on a property they might not actually acquire at auction but there’s certainly a useful and beneficial service to be provided to clients in that situation because a lot of defects are not necessarily obvious to lay people when walking around a building very briefly.

Host:     So a defects kind of, so I’m imaging like a great big white rendered wall and it’s got a huge crack down it, so I see a crack and I start panicking but I get the impression that you shouldn’t just panic with any old crack in the wall.  Is a defect that sort of thing or is it more permanent than that.

GC:        No that would be a defect it could be a structural defect, it could be a crack in the surface render or it could be more serious and pass through the underlying structure which could be brickwork, it could be evidence of subsidence but the skill of a surveyor is to establish the severity of that problem and advise on the possible solutions and the cost of those solutions to the client.  Other defects in buildings could extend to problems with the roof of the building, whether it’s a pitched roof or a flat roof, obviously roofs are key in terms of keeping the building work wind and weathertight, if a building isn’t wind and weathertight then it becomes exposed to problems of damp penetration, dry rot and other defects.

Host:     I remember I had a surveyor around some years ago and one of the things that interested me was that they didn’t start ripping up floorboards and kind of poking through walls and I guess there’s a cost element to this but if I was buying a place, I want to kind of get in there.  Is there like another level like something where you start digging about and why don’t you dig around on general surveys like that?

GC:        Some surveyors would expect to get floorboards up in a property for instance but there are limitations to what you can achieve by doing that and part of the surveyor’s skill is to establish that there is a risk or likelihood of defects without undertaking opening up, so for instance with a timber floor you could detect in most cases that there were problems underneath by the springiness of the floor which would indicate that it wasn’t, you know, of sufficient strength to support the loads it was designed for and similarly with other parts of a building,  Some works of exposure can be achieved for instance in basements and cellars, in roof spaces but there is a limitation in terms of the amount of opening up that you can do because you have to be responsible for any damage that you actually do to a property, so you can’t start taking off plasterwork etc. in a property.

Host:     It is expensive to replace plasterwork isn’t it I can understand that why that comes around.

Host:     So how do surveyors in your line of work as surveyors, what is the difference between a surveyor who comes around and does a valuation on my house when I’m ready to sell, or the mortgage guys get the surveyor out?

GC:        Well a valuation surveyor is principally trying to establish the value of the property and although that can be influenced by the condition of the property it will also be influenced by market factors, other properties in the area, the location, the proximity to the tube and shops etc., so their inspection would be limited in terms of assessing the condition of the property purely in the context of that the effect of that condition on the value, whereas a building surveyor would look in far more detail than that and comment on issues which might not necessarily effect the value significantly but would certainly be of importance to you as a property owner.

Host:     Have you found people find that there are lots of different types of surveying or surveyor titles quite confusing and how do you within your own industry kind of identify who does what if you say I’m a surveyor and what’s your next question that identifies the level of surveying?

GC:        I think it is confusing for the average person as there are so many careers in surveying, there are over a hundred careers that you could follow as a surveyor covering mining, minerals, agriculture, construction, development.  If somebody asked me what I did as a surveyor I would explain that as a building surveyor my job is principally to look at buildings and report my findings to client, that’s essentially what building surveyor’s do in simple terms.

Host:     So, you are not like a glorified estate agent then?

GC:        Definitely not no, we do not buy and sell property as building surveyors, and we have professional qualifications which we have to keep up to date in terms of our professional experience and continuing professional development, so we are liable for our comments both to clients and in the wider public arena and the institution have strict ethical rules governing our professional practice and activities.

Host:     So you led onto a really interesting point there, so if the general public is looking around for a surveyor to bring in, some people are just called Building Surveyors, other people are Chartered Building Surveyors and there’s this RICS accreditation they have, can you talk to us about what that means and the differences between, why are some Chartered and some aren’t?

GC:        A Chartered Surveyor is qualified to undertake building surveys and has Professional Indemnity Insurance to back up the advice that he or she gives, somebody who doesn’t have Chartered Surveyor status would be unable to obtain insurance and in those circumstances the client would be exposed to a possible loss by instructing a non-qualified Surveyor or Building Surveyor in that situation.

Host:     So, in essence not only have we got a more regulated individual, but we’ve also got someone whose been tested, I suppose, by piers as well.

Host:     And therefore, I guess, I suppose it’s a really hard entrance exam to, somewhere like if you wanted to join the Military or something you’d have to be expected to pass that and once you’re in its more of a, is it a club or is it more of an association?

GC:        It’s not a club, I mean it’s an institution which regulates the members who are part of that institution both in terms of their performance, their activities, their compliance with the rules of the institution which cover all sorts of areas of concern to the public including money laundering, looking after client’s money, ensuring that clients are not exposed to situations where a surveyor is acting for two sides at the same time and is unable to give unbiased advice.  The qualifications required to become a Chartered Surveyor are usually achieved by undertaking a degree which is approved by the institution, then a period of two years of experience followed by a test by three experienced surveyors who will assess that candidate’s suitability to become chartered.

Host:     Okay I think that is useful.  Is there anything you want to add on the end otherwise I’m sure people have got a good idea about what it means to be a surveyor today?

GC:        Well, it’s a very rewarding career to be involved in, I recently went to chat to some 15-year-olds at a school, a grammar school, and out of 200 children they started the discussions by saying they wanted to be doctors and dentists and accountants but by the end of our discussions they showed a keen interest in finding out more about the career of a surveyor.

Manage Cookie Consent
To provide the best experiences, we use technologies like cookies to store and/or access device information. Consenting to these technologies will allow us to process data such as browsing behaviour or unique IDs on this site. Not consenting or withdrawing consent, may adversely affect certain features and functions.
Manage options Manage services Manage vendors Read more about these purposes
View preferences
{title} {title} {title}